“Just believe in yourself, and you can achieve anything.”

“Pursue your dream, and don’t let anyone tell you that you can’t do it.”

So, why would any young person ever doubt it?  Most believe it 100% — until they experience enough reality that they realize that it’s a lie that adults tell to make children (and themselves) feel good. It’s just like the Easter Bunny, Santa Clause, and the Tooth Fairy.  It’s something that feels good and right at the time, but eventually, life reveals that it’s just not true.

How many boys have spent hours each day playing basketball in the driveway because they knew that they could one day play in the NBA?  How many make it?  How many can even reach the simple goal of dunking?  I know I tried everything to dunk, only to find that I was just not able, no matter how much I believed, how much I practiced, or how much I learned.  I wasn’t good enough to play in college either.  I wish someone (or several people) had told me something a lot more truthful, such as, “Quit trying to dunk and spend more time shooting because your only chance at playing in college is as a shooting guard.  But don’t count on it, since the odds are extraordinarily stacked against it.  Studying is much better for you than playing so much basketball.”

How many girls have spent endless hours singing in order to make it in the music business.  How many make it?  How many can even reach the simple goal of getting the lead part in their high school musical?  How many high school musical leads get a recording contract?  How many girls will be the next Miley Cyrus or Beyonce?  What percentage of American Idol contestants succeed in getting fame?  For millions of girls, it just doesn’t happen — no matter how much they believe in themselves and practice and learn and believe some more.  It’s a fantasy.

It hinders kids to tell them that they can do whatever they put their mind to.  And that’s in addition to the fact that it is a lie.  It may be easy, feel-good advice, but it’s not true and it’s not helpful.

So what’s the solution?

The solutions is to be honest.  Be involved in a child’s life, and be honest about what you see in them. Tell them their strengths and weaknesses in a kind, loving way.  They will respect your honesty in the long run, and your honesty will honor them.

Many years ago, I was teaching high school English, and a couple of fifteen-year-old boys were talking about how they were going to spend their money once they won the lottery.  I responded frankly, “You won’t win the lottery.  It won’t happen.”  They laughed at me, thinking that I was joking with them.  I followed up with, “I’ll bet you $1,000 each – no, I’ll bet you $10,000 each, which is my life savings at this point, that none of you will ever win a lottery prize of more than $1 million.  And I am 100% serious.” They couldn’t believe how stupid I was being.  They just knew that with enough belief and perseverance, they would win a big lottery prize.  It was a fact in their minds.  So I explained that all the odds were in my favor; only about 1 in 18 million tickets win a state lottery, and in PowerBall lotteries, it’s more like 1 in 120 million.  I just wanted them to see reality, not hindered by the belief in a fantasy.  I explained that it is fun to think about winning, as long as you know that it’s just a fantasy and that it’s not a good use of money.  The truth is that $10 per week is $520 per year, which amounts to $26,000 over fifty years (and that does not include the power of compounding interest).  Now, would it have been better for me to say, “Good luck! Believe in yourself, and don’t let anyone tell you that you can’t do it.“?

Kids need to learn their abilities.  Then they can play to their strengths.  Then they can learn more about how their abilities match up with others and the real world applications.  If they are gifted in math and science, and they enjoy it, then they should pursue that with gusto.  But that takes adult guidance, since it’s not as cool as American Idol.  Our kids need more guidance, so they don’t go off to college without a clue as to what they might do, since they just recently figured out that the NBA and Hollywood weren’t interested in them. 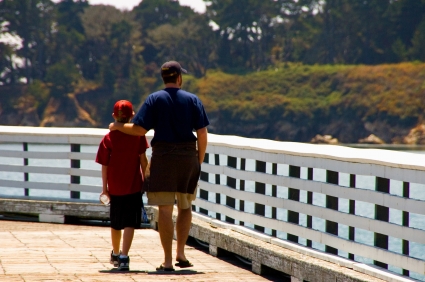 It takes wise, caring adults to speak into the lives of young people, saying things like, “I think you have a brilliant scientific mind.  You would be a terrific doctor or researcher, and you could actually save lives, maybe even thousands of lives!  I am not just saying that.  I truly believe it because I know you, and I know the world.  If you pursue that with everything you have, you will succeed.  I’d bet a million bucks on it.”

With that sort of guidance, they can make real plans for the real world.  Then with those plans, they can go forward with all the confidence in the world, knowing that the odds are in their favor.