This week on the car radio, I overheard the most obnoxious sports radio talk show host furiously ranting and raving about how corrupt professional and big college sports have become.  It went something like this: “Don’t let your kids idolize anyone in sports today!  It’s an ugly business, full of greediness, lying, cheating, and everything that is wrong with this world.  There are no role models in sports anymore!”  To me, it was a shocking rant because his livelihood is made from talking about sports, yet there he was betraying his industry with the most extreme language.  He didn’t “pull a punch” or let anyone off the hook.

He explained with the utmost disgust that all professional and big college athletes, coaches, and executives are tainted by the money, the power, and the fame.

It troubled me as I thought of the players from my childhood who were my role models: Cal Ripken Jr., Lou Brock, John Stockton, Roger Staubach, and Walter Payton.  I thought about some of the role models that I have in sports now:  Peyton Manning, Kurt Warner, Albert Pujols, and others.  Are they in some way corrupt too?  Are they just putting on a show for the public?  Or are they just the extreme minority — one of just a very few people in the sports industry who have stayed grounded in spite of all the corruption around them?  Or is this radio host just off his rocker once again?

I think that what he is saying is largely, but not entirely, true.  I think there are a few (perhaps just a very few) people in professional sports who operate the same way they did as kids – doing what they do, for the love of the game, immune to the liars, cheaters, and bullies on the playground. 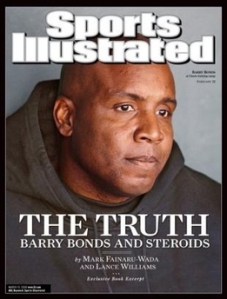 Of course, there are always going to be some outright criminals, such as Michael Vick and Mike Tyson, just like there are in every industry.  And there will always be those who may not be criminals, but we all know are not trustworthy, such as Barry Bonds, Mark McGwire, and Sammy Sosa (and that’s just in baseball).

But let’s just look at some of the “good guys” who have had such squeaky clean images.  Consider Tiger Woods, the world’s greatest golfer, who is now ashamed to show his face in public because he has been exposed as a colossal liar and cheater in his family life.  Consider Alex Rodriguez, the world’s greatest baseball player, who has been exposed as a big-time liar and a cheater in his long-time use of steroids.  These are the good guys, adored and endorsed by so many.  It’s a shame that we can’t trust the guys on the posters and commercials, or the people behind those images.

For more proof of the calamity in sports, here is a short list of links to some of the most famous liars and cheaters in recent sports history:

Breaking the Rules in College Football

Manny Ramirez, the second highest-paid baseball player, is a known user of performance-enhancing drugs and a pretty lazy left fielder.

Kobe Bryant, the greatest basketball player right now, faced criminal charges of sexual assault during an adulterous affair.  The criminal case was dropped by the prosecution, but the civil suit was settled out of court for millions of dollars of “hush money.”

Marion Jones, the fastest female sprinter in the world, was stripped of her Olympic medals for using steroids and went to prison for lying to a grand jury.

Floyd Landis, once the fastest bicyclist in the world, was stripped of his Tour d’ France championship and of any respect of bicycling fans worldwide.

Tim Donaghy, the long-time NBA referee, went to jail for betting on NBA games and attempting to set up a gambling scheme with others.

Wives of pro athletes will tell jaded stories of the corruption in professional sports.  They know that it’s not necessarily “the good life.”  It’s a lifestyle that most often breeds greed, lying, cheating, gambling, infidelity, and arrogance.

It’s all become so normal that the fans and the writers are beginning to accept it.  Many columnists and talk show hosts are freely justifying it.  They say it’s all just part of the game of sports entertainment, and that it makes it all so much more interesting and colorful.  (Here’s one, as a sample.)

So what do we do?

An answer came from a caller on the radio station.  He said that he had just attended a fundraiser for a young soldier who had served three tours of duty on the front lines in Iraq and came home without his legs.  He had a wife, children, and too many bills to pay, yet he was proud of his service and showed no signs of bitterness about his sacrifice.  The caller said that this young man inspired everyone who he met, and everyone agreed that he is a real hero, not because of his disability, but because of his sacrificial service and his devotion to others.  And that was when the talk show host calmed down and said in a moment of clarity, “Exactly.  THAT is the man we need to lift up and praise.  That is the kind of person we should admire and celebrate.  That’s the answer.”

Fortunately, the answer is broader and even more hopeful, for soldiers are not the only ones to respect.  We can admire all kinds of people who truly deserve our praise.  How about the mom who does so much right to raise her children, and the dad who takes a second job at night to pay tuition for his kids to attend a better school.

Carson, the night time janitor at my school, is a great example of the kind of person I want my son to admire.  He is a much better role model than any professional athlete.  He is kind, hard-working, humble, encouraging, skilled, and cooperative.  He finds new ways to do his job better and encourage the people he works with and for.  He gave me a Rhonda Vincent CD for Christmas because we had talked about country music, and he knew that I liked Alison Krauss.  He’s amazing.

Mark, the man who mows the lawn and plants the flowers at our school is the same way.  He does the absolute finest job of beautifying the grounds at our school and does it all with a smile, even when he’s spreading salt on the icy sidewalks at 5 AM.  He is a good friend to all he works with and finds ways to mentor the young men in his department.  The more you get to know him, the more amazing he is.  Hardworking, highly-skilled, humble, kind, honest, and strong.

There are hundreds of little league and high school coaches in every community who spend hours each week planning and leading practices, making phone calls, devising strategies, and inspiring kids to give their very best when they are tired and frustrated.  They encourage kids to be good, play hard, and learn from their mistakes.  And they get paid little or nothing for it, but they love kids and the game, and that’s enough for them.

So, the answer is to make sure our kids see these people — the real deals.  We need to make sure we tell them that athletic ability does not make someone special.  Character is not built with a ball on a field with extraordinary athletic talent.  It is built slowly and surely, sometimes in humble places, until one day it shines enough to inspire another person to become better than they once were. Sounds like the Christmas story, doesn’t it?  Role models are in the home, at church, driving the bus, coaching another game, changing diapers, disciplining the toddlers, cleaning the house, teaching new lessons, telling the stories, cracking jokes, bandaging the wounded, and loving the unlovely. These are the answers to the problems of all the scandals in professional sports.  These are the answers to most of our problems.  Get your role models locally.