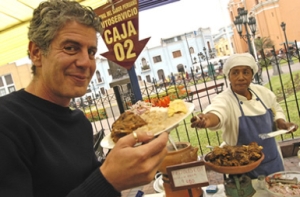 Anthony Bourdain, is an American chef, author, and television personality. He is well-known as the host of the Travel Channel‘s culinary and cultural adventure program Anthony Bourdain: No Reservations.

Tony is a rebel; it’s in his blood, and he has used that iconoclastic attitude in a largely positive way – as an aspiring international chef and as an entertainer.  In addition to his often-abrasive personality, Tony has a soft heart for people. There is a kindness in him that shines through, even when he is putting on a tough front. He is sweet and sour, you might say.

In his wildly-popular and critically-acclaimed book Kitchen Confidential: Adventures in the Culinary Underbelly, he recounts a crucial moment in his young life when he realized that the universe did not revolve around him.

“My first indication that food was something more than a substance one stuffed in one’s face when hungry – like filling up at a gas station – came after fourth grade in elementary school.  It was on a family vacation to Europe…our first trip to my father’s ancestral homeland, France.

“I was largely unimpressed by the food…Centuries of French cuisine had yet to make an impression. What I noticed about food, French style, was what they didn’t have…I was quickly becoming a sullen, moody, difficult little bastard.  I fought constantly with my brother, carped about everything, and was in every possible way a drag on my mother’s Glorious Expedition.

“My parents did their best.  They took us everywhere, from restaurant to restaurant, enduring silently my gripes about cheesy butter…eye-rolling and fidgeting; they tried to encourage me to find something, anything, to enjoy.

“They’d taken my brother and me, the two Ugliest Little Americans, everywhere. And then there came a time when, finally, they didn’t take the kids along…

“The town’s name was Vienne. We’d driven miles and miles through the graceful French countryside to get there. They pulled the gleaming new Range Rover into the parking lot of a restaurant called La Pyramide, handed us a stack of comic books…and then left us in the car!

“It was a hard blow.  Little brother and I were left in that car for over three hours, an eternity for two miserable kids already bored out of their minds.  I had plenty of time to wonder: What could be so great inside those walls? What were they eating in there. I knew that what they were eating was a Big Deal… in 1966 La Pyramide was the center of the culinary universe, the Mecca for foodies.

“Food it appeared could be important. It could be an event. It had secrets…This was a pilgrimage for my parents. In some small way, I got that through my tiny, empty skull in the back of that sweltering parked car.

“Things changed after that.  I changed after that…For the rest of that summer, and in the summers that followed, I ate everything…learned to love the cheesy, rich Normandy butter…and I had my first oyster, a truly significant event…I was eating, really eating. My life as a cook, and as a chef, had begun. Food had power. It could inspire, astonish, shock, delight, and impress.  It had the power to please me – and others.”

Kudos to Mr. and Mrs. Bourdain for not letting little Anthony eat that fine meal in Vienne, France in 1966!