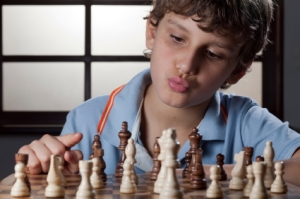 Chess is one of the best educational games of all time.  Even the most casual player will admit that the game forces you to think critically —  just to stay alive and not look like a fool.  There is no way to simply stroll through even a single move in chess.  You must think creatively and carefully before each move.  And while some may say that kids today are not capable of sitting still for an hour to play a game that has no electric power source, there are millions of kids today proving that assumption wrong.  Kids who play chess will tell you that it’s fun and challenging and they wish more kids would join in with them.

Now, there are other games which require similar thinking skills, but there may not be a better game for sheer educational value.  The number of thoughts per minute is staggering.  Offensive options, defensive trouble-shooting, cause-effect relationships, spatial awareness, calculating numbers, imagination, and creative thinking are just a few of the thought processes that are involved in every move.