Too Much Tech at School? 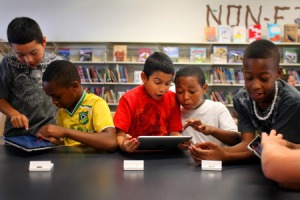 Bring Your Own Device (BYOD) is a popular trend sweeping schools this year. Schools with BYOD policies will be asking students to bring an Internet-Connected Mobile Device (smartphones, tablets, laptops) to school each day. Many educators believe that in the very-near future most books for school (textbooks, novels, workbooks) will be stored on a digital device instead of stuffed in a locker or backpack. This new movement is being met with some excitement, some trepidation, and lots of questions.

As with all new high-tech devices, there is an awkward break-in period, in which developers rapidly create new applications and accessories, users experiment excitedly with various functions, and society struggles to manage the consequences. It takes at least a decade for the dust to settle. Just think of the cell phone. It’s been around for twenty years, and people are still struggling with how to use it in a productive but healthy way. We still lack a standard set of “rules of the road” for cell phones. Since BYOD is just beginning, I would like to offer my own set of questions and concerns. 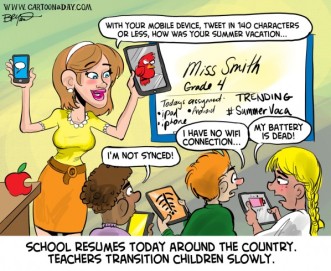 I own a MacBook and an iPad, and they are tremendous tools for me as a teacher and a writer. I use them daily, and they serve me well. They are not evil inventions. Far from it. As with every bit of technology, they are not immoral. The devil is in the details of their usage.

Whether it’s an iPhone, iPod, or iPad, it is a multi-functional devices that is not a simple educational tool. It is a video camera, a Facebook device, a YouTube player, a video game console, an email station, a texting device, a music and video player, among countless other fun applications.

Michael Simon, in his new book titled The Approximate Parent, says “Digital media is ever-present and incredibly attractive to teen brains — especially teen brains that register novelty, risk-taking and the feeling of connection as highly pleasurable. The Internet, gaming, and use of social media are addicting.” We need to realize that these devices are not just another tool in a line of educational tools, the way the VHS followed the film strip projector.

There is an age-appropriate time and place for these digital devices, and I believe it is our task as parents and educators to make those decisions for the young people in our care. This is no small task. In fact, END_OF_DOCUMENT_TOKEN_TO_BE_REPLACED